A Tale of Two Dogs

Way back in 2008, we (my husband) decided we needed a companion for our Boxer, Simon. Pacey was a toddler at the time and I recall one weekend we visited a breeder with a litter of pups. Naturally we experienced the temporary insanity caused by the adorableness of Boxer puppies and put a deposit down on the biggest, most energetic of the bunch. I came to my senses shortly thereafter, had a spectacular meltdown and we sheepishly collected our deposit and went on our way, sans puppy. Next up we thought maybe we'd rescue a dog in need of a home. I won't go into the details, but we ended up bringing a female Boxer home from the rescue that we had to return later the same day (trust me when I say it was about the worst rescue experience you could have that doesn't involve someone getting bitten).

At that point I was more than ready to give up but Chris persevered and eventually we found Huff's original family on Craigslist, needing to re-home the 100 lb dog living in their apartment. We met him, it was a perfect fit, and he came home with us that day. Huff was...not the smartest dog we've ever met but he was the sweetest, gentlest big bear of a dog and just settled right in with us. He made the move with us to Minnesota, adapted to the snowy winters like a champ and took the eventual loss of his canine brother-from-another-mother in stride. He started to slow down, spending more and more time sleeping (and snoring and farting. My god, the snoring. My god, the farting). Then in February, he really started to decline. One of the hardest things about being a pet owner is being faced with end-of-life decisions. We are fortunate enough to have the option of allowing our pets to die peacefully and end suffering, but knowing when to take that step feels like a daunting prospect. As it turned out, there was no question at the end that he had no more days of life without suffering in him. The vet believes he had a tumor that ruptured and he was in a lot of pain. It was a terribly hard day, but we let him go feeling like it was time. The kids did remarkably well saying their goodbyes and grieving for him. 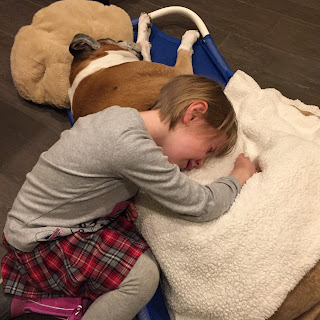 While the house felt empty for a few days and we all missed Huff, I will be honest and say I adapted very rapidly to not having a pet in the house. Chris and the kids wanted to get another dog right away but I put my foot down and declared we would remain pet-free until the end of the summer. I did relent and say we could go through the initial steps of being vetted by the Boxer Rescue here in MN so that when we were ready we could go ahead. Chris checked the website every day and put the hard sell on various dogs that would come up for adoption, but it was actually really easy for me to refuse to even consider any of them.

But then fate/life/social media intervened and a good friend I used to work with in California posted on Facebook that she needed to re-home their two-year-old Boxer. I knew that he'd have been raised well, she had small children and another dog, and basically it was the perfect scenario. It was totally up to me to pursue it...I could never have said anything and stuck to my line in the sand regarding the end of summer timeline. But I didn't. I contacted my friend, we arranged transportation, and on the 4th of July, Buddy arrived to join our family.

He's only been here a week, but it feels like longer. He fits perfectly with us. He is the sweetest boy, past the truly awful puppy stage but still with plenty of vigor (and a few bad-ish habits that need correcting). We are certainly still in a transition period...the kids were used to a much more sedate animal in the house and Buddy is used to playing enthusiastically so they - and he - are adapting. But we are so happy he's here. I am enjoying him far more than I expected to and it feels right hearing the click, click, click of doggy toenails on the floors. My friend and her family are thrilled that Buddy came to live with someone they know (they are moving out of the country which is the only reason they needed to re-home him), and I am thrilled that we were able to adopt a dog without dealing with the uncertainties of an animal with an unknown background. Win, win, win, and proof that there is good to be found amongst the horrible displays of humanity made possible by the internet. Stay connected to people, and you just might get a Buddy. 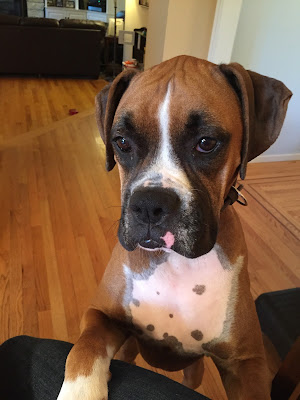 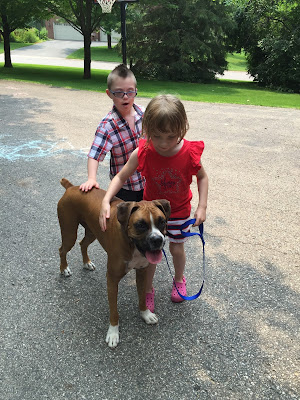 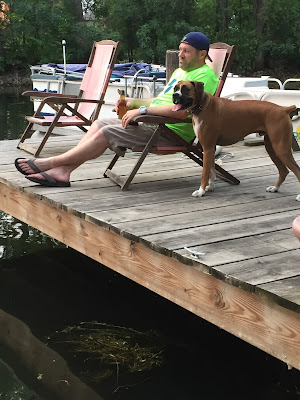 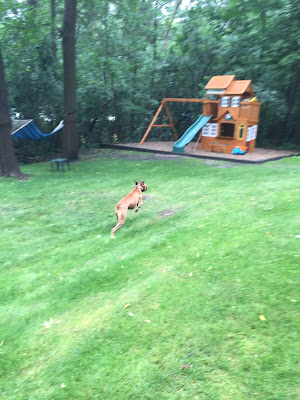 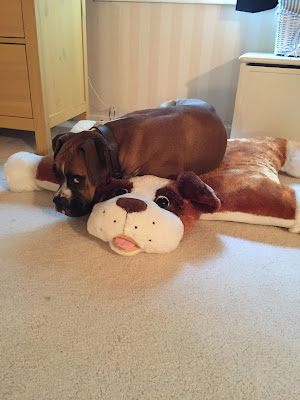 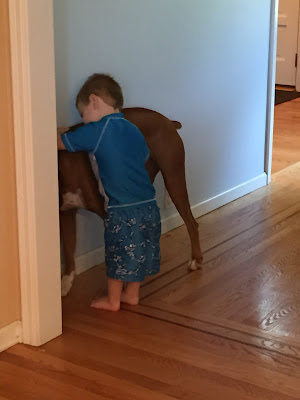 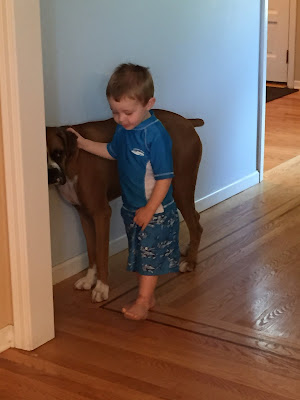