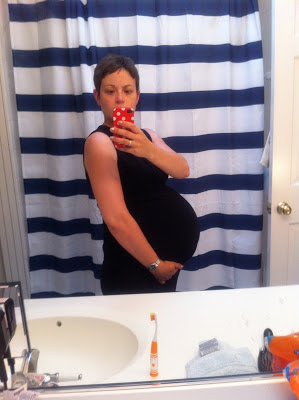 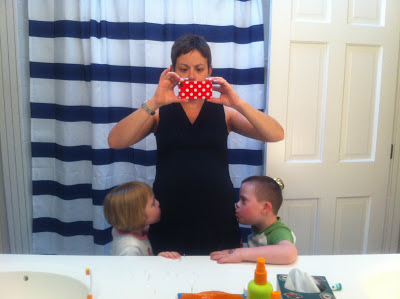 I'm really trying to focus on enjoying these last few weeks in some fashion (as this is the last time I plan to be pregnant) but I really just want to meet my Hedgehog and see my ankle bones again.
Posted by Jaida at 9:43 AM 1 comment:

I think I've mentioned before that I'm not really an avid news reader. I go through phases of feeling a little ashamed of how relatively uninformed I am on some topics but hey, I figure if it's important enough it'll be all over twitter and Facebook anyway right?

Sometimes, though, there's a story that hits close to home - literally - and I can't avoid hearing about bad things. My husband's work colleague's son was in a terrible car accident last weekend and is facing a really long road to recovery. It sounds like he is stabilizing and there aren't signs of neurological damage so far, but I think it's unlikely he will ever physically recover fully from all his injuries. Certainly not enough that he will return to the career he was starting as a baseball pitcher in the minor leagues.

Now that I am a mother I automatically digest these stories from the perspective of the mother(s) involved. I cannot even imagine the horror you must feel getting that phone call. And yet somehow, in a small way, I think I would also feel a strange sense of validation: I was right to do all that worrying. When I allow myself to think about all the ways my children are vulnerable (as humans, as well as being small kids right now), the helplessness makes me feel angry. Angry that we can't lock them up, can't always be with them, have to figure out ways to help them navigate their way as safely as possible through life, all while knowing the worst can happen. Ugh.

Anyway, if you feel so inclined you could send some positive thoughts out into the universe for this boy and his family. And the old cliche goes without saying...hug your kids close and be happy that today wasn't a day you had to get that phone call.
Posted by Jaida at 8:12 PM 1 comment:

Someone is Stealing Weeks from My Calendar

If I don't sit down here and dump my brain I'll never get around to it. I miss blogging, really miss it and I want to get over this mental hurdle that there's too much I've missed to get back into it.

- I am at that point of pregnancy where people look at me with either deep sympathy (females) or concern that I might just go into labor any second (males). I lumber/waddle when I walk, my legs and feet are tree trunks and bricks, respectively, by the end of the day and more than one person has remarked that my belly couldn't get any bigger. News flash folks: it can and it will! Still, less than four weeks to go.

- We almost have a nursery! My poor husband...I don't even want to calculate how many tons of furniture he has had to haul around and move (hello, hernia). Following yet one more great rearrangement/redistribution of heavy things, everyone has a place to sleep, store their clothes and sit and recline while attempting to doze between hourly night wakings/feedings. I feel like it's been a marathon to finally get to this point where I can nest properly...I will be doing a load of tiny laundry later this week just because I finally CAN!

- The house has come together beautifully, if I do say so myself. We have hung most of our artwork and photos which has really made it feel like home. We're also hosting a housewarming party next weekend (You: You are crazy. Me: Yes, yes I am) and it will be so nice to have all our friends and "family" out to see we are. There are still maybe 10-12 boxes to unpack (mostly the motley boxes o' shit you throw together when you're sick of proper packing) but otherwise we are pretty much there. Did I mention I'm never moving again?

- The kids are adjusting really well. Last week and this week we've had daily swim lessons and playground programs, plus the usual therapy sessions and life-living to do. They are both doing phenomenally well in their swimming, especially Pacey. He and his best buddy are sharing an adaptive lesson with a private instructor and it could not have worked out better. They motivate each other and his mom and I get to sit and gab during the lessons (each of our other two kids happened to land in the same class too so we spend the three-hour block the whole thing takes together).

- Miracle League has finished for the year and it was just an amazingly positive experience. I know some people have mixed feelings about the idea of separating kids with special needs out in this way, but for us, for my kid with special needs it was perfect. And frankly, I think it was exactly how all kids should learn sports, in a completely supportive, non-competitive environment without parents having to hover. The biggest global hurdle that Pacey faces on a daily basis is that his cognitive delay requires him to spend a little more time processing incoming information and formulating responses. In the Miracle League environment, he had that time with no pressure from anyone, just cheers and support. I'm amazed at how much he learned about the game of baseball and how it is played, and he really improved his skills by emulating his buddies. Plus, he just love, love LOVED having bigger boys be his buddies. Much more fun than having mom or dad running around there on the field with him. I don't know where we will go with baseball, or any other sport for that matter, but I'm so pleased that he had a chance to be independently part of a team and learn some new skills.

- I feel compelled to mention a little something about Chris because we totally skipped over Father's Day. We agreed back in April that we were going to skip celebrating Mother's Day and Father's Day for the most part. There was so much going on, B's birthday landed on Mother's Day and the kids are both still at ages where they really need help expressing their appreciation. In retrospect, I don't love that we made that decision. Parenting can be so thankless at times, and I think that we need that one day a year to hear from our kids and our spouses that we are doing a good job. Doesn't have to be extravagant to be meaningful. Anyway, Chris spent Father's Day unpacking and organizing the garage, a task which sucked so mightily it can't be described. I wish I'd taken more of the opportunity to let him know what a great father he has become (he's never been a bad dad but I'm sure he would agree that he's grown and settled into the role as the kids have gotten a bit older). He is someone that took a variety of sometimes non-traditional parental influences and put them together into a really good parenting style. The kids love him dearly (and so do I).

- I still can't get absorbed in a book to save my life. I am actually going to put my library request list on hold because I'm not able to get through anything before it has to go back. I think I remember this from the end of my previous pregnancies, but it's still weird. I am missing the mental escapism. Let me know if you have any books you've read lately that you just couldn't put down. Oh, I did read Jodi Picoult's newest book The Storyteller, which I thought was very well-written and quite compelling but really affected me emotionally. It was a very difficult read.

- I can't believe it's already the end of the month. The 4th is next week, and that feels like mid-summer to me (it's not really, by the calendar and by our school schedule here in MN). I look back at last summer and our bucket list of activities that we accomplished and I feel a little guilty that it's not all fun-fun-fun around here this year. The kids don't seem to notice/mind but I'm not ready for summer to stop being a free-for-all. I'm glad the baby will be nearly a year by next summer so we can return to our usual crazy pace. And until then, the weeks can feel free to continue flying by til July 22.

Ok, picture dump and that's all the time I have. Brighton is playing me "pretty music" on the piano while I type and Pacey has asked me approximately 475612983 times if he can play the iPad (no he can't)(he had the privilege removed as a result of hitting me) so my concentration is shot.

Dusting Off, Settling In

We sold a house, we bought a house, we navigated countless little (and not-so-little) obstacles along the way, and now we are home. Forever. I am never ever ever moving again. Even when we are old and snowbirding, I will buy a second set of everything for our sunshine home. Hear that kids? If you want grandparent help you better stay in Minnesota.

Joking aside, I am so grateful to be past that giant hurdle. It's such a first world whine, since we moved from one beautiful suburban home into a frankly even more beautiful and spacious home, but I have a hard time with change and transition and this was no exception. We only moved 10 miles but it's new schools and new therapists (probably) and a new supermarket and a further drive from the life I've built over the last three years. But my GOD do I feel fortunate. We have landed in a lovely, lovely part of the world and I am so excited to get settled in and start the next phase of our life in this new family home.

We moved all in one day (don't recommend, but really, who can avoid it??) and have unpacked the major functional areas so that now we can slow it down a bit and take some time. Good thing too, my poor stretched out and lumbering body is crying out for rest by the end of the day. We all immediately came down with that classic post-stressful-event virus and have been coughing and hacking nonstop. There are still boxes everywhere and I can't complete one task without seeing/thinking about 20 more that need my attention. My poor child actually ASKED for salad the other day, so I made it a priority to get us back on a schedule of reasonable bedtimes and healthy, home-prepared food. Summer vacation has begun and we will spend lots of time at the parks, libraries, swimming, etc in addition to all the chores. And in just six short weeks we will welcome our Hedgehog.

Here's a few shots of the new place, I'll post more as we get things more organized. 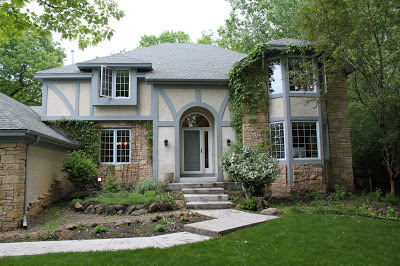