One of the perks of moving from California to Minnesota was the ability to stretch out from our previous 1500 square feet to 3500 square feet of living space. Lest that sound like bragging, please note that I have to clean each and every one of those square feet, currently occupied by two small children, two large dogs and one husband with frequently muddy and very large shoes.

Anyway, at the time of the move both kids were really developing their desire to explore and neither one had many verbal skills yet. The first two months or so in the new house, therefore, were basically a neverending game of hide-and-seek in which I was always the seeker and rarely got any hints as to the hiders' locations. Over time, we have restricted access to some of the less kid-friendly rooms and Pacey and Brighton have - for the most part - starting responding with some verbal clues as to their whereabouts.
Leave it to Pacey, therefore, to up the ante. For anyone that doesn't know, kids with Down syndrome are often hyperflexible due to laxity in their muscles and joints. This, combined with a seriously creative mind, have led to increasingly more hair-raising "games" of hide-and-seek with my bendy boy. Some favorites have been:
1) The time he removed the middle two drawers in his dresser and hid literally inside the dresser, 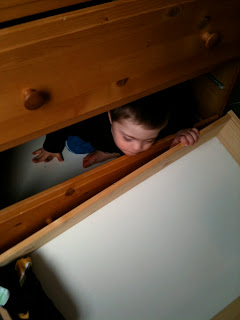 2) The bizarre day when I heard him crying/calling for me from his room and I went up to check out the scene, only to find his room seemingly empty. I could hear his voice, but could not see him ANYWHERE. I was started to get kind of freaked out when I turned around and found him folded inside his football-shaped toy chest. Now, the opening of this toy chest can't be more than 12 inches in diameter and he had folded himself inside just right so that he entirely filled it up. I had to actually strategize how I was going to extract him!
And 3), the most concerning episode yesterday where his voice called to me, echoing, from the laundry room where he had climbed inside the dryer drum. Now, most of the time his hiding is mainly amusing but I admit this totally freaked me out. All I could think about was that Punky Brewster episode where Cherie hid inside the old refrigerator (raise your hand if you were a kid in the 80's...). We had a talk about how getting inside the dryer is dangerous and never okay but I am pretty tempted to revert to clothesline and clothespins at this point.
I'm thinking Pacey could have a future with Cirque du Soleil...or at least as part of a casino-robbing gang.
Posted by Jaida at 8:09 AM No comments: 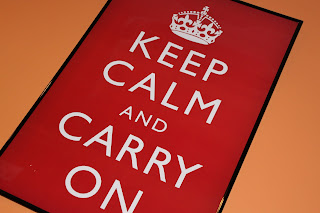 I'm sure many of you have seen posters, canvases and other memorabilia bearing the phrase "keep calm and carry on." According to Wikipedia, the phrase was first used in 1939 on a poster developed by the British Ministry of Information. The poster, the third in a series of three, was designed to boost morale of the British public in the event of an invasion but was never actually distributed. The first two in the series, "Your Courage, Your Cheerfulness, Your Resolution Will Bring Us Victory," and "Freedom is in Peril" were used across the country for motivational purposes. Apparently the Keep Calm and Carry On poster was re-discovered in 2000 and used as a decorative them for various items.
So anyway, I first saw the poster on a website around this time last year. For those of you that may not know, we were living in South Pasadena, California at the time. Brighton had just turned one, Pacey was three-and-a-half and Chris and I were both working full-time. We had recently purchased a house in the mountains to the north of Los Angeles and were trying to find time to make it into a weekend escape spot.
For a number of reasons, both Chris and I were getting increasingly frustrated with the pace and chaos of our lives. I was responsible for the bulk of child-related tasks around my working hours, while Chris was spending an average of two hours each day just getting to and from his job in El Segundo. I joked at the time that Brighton's first words would likely be "hurry up" since that was the only thing I felt like either kid ever heard from me. To make a long, drawn out discussion short, Chris and I decided that we needed to make a big change if we were going to live our lives and raise our kids the way we wanted to.
Note: One should be very, very careful when mentioning to Chris Harris that one has the desire to accomplish something in which he could be instrumental. You may find that what you offhandedly mentioned as a passing whim, he has single-handedly put into motion...
One of the things we had discussed was the fact that we felt like trying to raise our kids around two full-time jobs was causing both of us a lot of stress and discontent. We agreed that we would explore some scenarios in which I would stay home full-time with the kids. Chris sniffed around a few opportunities and, to massively sum up, within approximately three weeks of our discussion he had pursued, interviewed for and been offered a job in Eden Prairie, Minnesota. We decided to accept the offer and he agreed to start the first week of June.
So, I found myself facing the next two months effectively as a single, full-time employed mother, planning to move her family across the country. We had to coordinate the packing and moving of two houses full of possessions (not forgetting the newly purchased mountain home), find and purchase a new home in a state we knew virtually nothing about and, particularly important to us, select an area and school district that would provide the necessary support for Pacey's special needs. To further complicate things, Pacey was having trouble keeping his oxygen saturations at adequate levels and he would need to have his tonsils and adenoids removed prior to the move.
So I came across the Keep Calm and Carry On poster and it became my mantra. The house(s) got packed and moved, Pacey's surgery was completed without incident and was incredibly successful, we found a lovely house in a wonderful neighborhood and school district and I survived getting the kids and I from CA to MN on my own. For the most part, we kept calm and we carried on, and made it in one piece to start our new life. My poster hangs in the basement now as a reminder that we're capable of an awful lot if we approach it the right way.
Posted by Jaida at 3:53 PM No comments:

Well, I've been thinking about it for quite awhile and decided to bite the bullet and start a blog. I've been sending out photo updates via email, but that process seems a little archaic compared to just dumping it all in one space. Anyway, I probably won't post every day but I think I've enabled a function where you can get an email alerting you to a new post. Any family and friends that would like/allow me to link to your blogs, let me know. Let's see how this goes...
Posted by Jaida at 3:11 PM No comments: